Can a Trustee be removed for being a Pain in the backside?

In this episode of the case files, I discuss the Texas case of Ramirez vs. Rodriguez, et. al., a case that involves four sibling co-trustees and the attempt by three of them to remove their trouble-making brother because of his hostile actions. Is being a royal pain in the derriere enough to remove a trustee from office.

This case reminds me of a scene from an episode of The Marvelous Mrs. Maisel, an Amazon original series that I have featured in the video.

Both this case and the scene from the series drive home the point that sometimes mixing family and money can be an explosive combination. 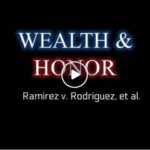